They are over 50 % among us; they are in all shapes and forms; - and there are no difference in volume of males and femailes of them - from the teethbiting evil who drag dogs in their tails to the calculating serial killers; or despots like Hitler; Lenin; Staling; Musoline, and the rest of them as everybody knows of, in today's world

They are everywhere; in all kinds of profession; lawyers, taxi-drivers, doctors, IT developer, like Zuckerberg - who lured millions to hand over their phone numbers so he could sell them.

Stay safe, learn how to expose them, and get rid of them immediately: - read this link to get very good informaion and advices to to protect you.

CHILD-ABUSE; all of them are perverts; from pussy/dick grabbers, to the abnormity that is not possible to find reference to; predator animals are GENTLE in comparison.

Here are 2 ecamples of those heinous, preposterous and devious crime by psyhopath paedophiles. When torturing and murdering the little 5 year old Pascal, they FILMED IT, AND HAD GREAT FUN SEEING HIM AND HEARING HIS WAILNG SCREAMS, before death came to his rescue. 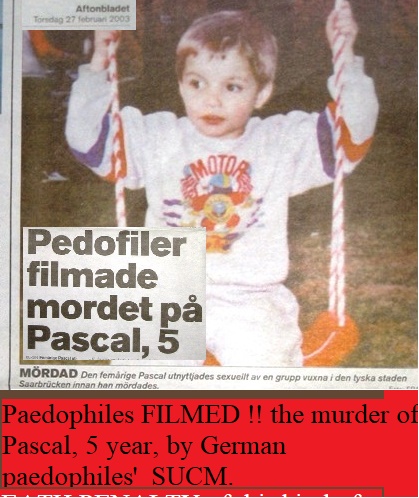 Woman police, Maria, asked me what it is like to know and expose such gruesome and grim child assaults and abuse.......I said to her, that if you know a surgeon, please ask him or her if they can CUT OUT the many memories that is never vanishing from my mind; pestering me day and night.

Child crime 2: Father, uncle, mother and friend, rape 8 year old boy. First the father, punching his dick into the screaming little boy; then the uncle, and his mother laughing and clapping her hands in JOY!! Then when they have emtptied thir sperm into the boy's anus, - they suffocate him with bare hands.

SO WHY THE FUCKING HELL IS THERE NO DEATH PENALTY IN EUROPE FOR THOSE MONSTERS!!!!!